The heart of ITESO

Between 1957 and 2007, the other history was also written. On this site, you will find stories about the campus, experiences that make ITESO a living being that changes day by day as some people arrive and others leave. 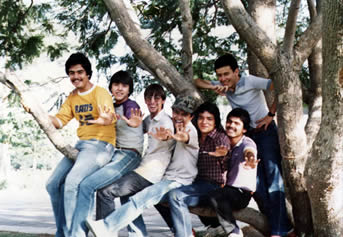 The incorporation of the study plans before the Ministry of Public Education hit its first snag due to the lack of a full faculty, equipment and a library.

On May 27, there was an armed assault by a group students from the Autonomous University of Guadalajara. The case became politicized, and the Governor of Jalisco at the time, Agustín Yáñez, exonerated the responsible parties.

On October 8, preparations began for the inauguration festivities, and the need for an Academy of Journalists was identified.

At first, the undergraduate programs in Public Accounting and Business Administration were taught according to the study plans of the Instituto Tecnológico de Monterrey.

In May, an Ethics program was proposed, including topics such as Introduction to the Holy Scriptures, History of the Church, Social Doctrine of the Church, and Professional Ethics.

The Academic Council board questioned the suitability of men and women attending "Family institution courses" together.

In May, students organized the first tree planting on the new campus. Each student had to plant four or five trees.

In December, the secretaries asked for a Christmas bonus. Since the precarious economic conditions of the university did not allow for this, each director donated 100 pesos as a Christmas gift to their secretaries and assistants.

The student massacre in Tlatelolco, on October 2, coincided with the start of classes and the first session of the Academic Council.

In October, the so-called "Honor Loans" were approved. They were granted to students without signing any payment documents. These loans implied a moral commitment on the students' part, not only to pay back what they had received once they completed their studies, but to make a donation indefinitely to help other students in difficult economic conditions.

Computer equipment was scarce. The first machine used by ITESO was a punch-card classifier, which was a donation. This artifact occupied the space of two first-floor classrooms in the C building, and had less capacity than a calculator today. Five years later, in 1974, ITESO acquired a programmable Hewlett Packard calculator for the price of around 5,000 dollars, which made it possible to start simulation models in the field of electronics to create small programs. On July 31, 1981, ITESO purchased a digital computer, considered state-of-the-art technology at the time.

In October, ITESO set up a first-aid station, a kind of fledgling infirmary service located behind the A building auditorium.

The ITESO Newsletter served as a vehicle for information within the university. In May, it changed its name to Inter-com, and both are direct precursors of Magis magazine. In 1982, ITESO-Ahora took the place of this gazette. November 11, 1992 saw the birth of the Noti-ITESO newsletter, which was subsequently replaced by the Cruce weekly paper, which had its first edition on August 16, 1997. In 2005, the new image of Magis was presented; Magis had been published since 1997.

In March, the Gonvill bookstore donated a set of books to the library, which was directed at the time by Enrique Moreno.

The first offset printing press was acquired for the Publishing Center.

The Rector Raúl H. Mora Lomelí, SJ, reminded students of ITESO's outlook regarding the treatment of the disadvantaged, in his speech inaugurating the new semester: "I think, for instance, of the rather ostentatious way students express their justified joy at graduating," he said.

ITESO organized a singing contest, which took place at the Degollado Theater. Another called "Young People and Their Song" was held later at Channel 6 in Guadalajara. These events gave prominence to Alberto Escobar and Álvaro Dávila, who later went professional.

Toward the end of the year, the first grass soccer field was inaugurated. The first game was played against Atlas, and ITESO lost 6 to 1.

The first steps were taken to move the library of Puente Grande (the Jesuits' house of studies) to ITESO. A large portion of the collection from this library came from the juniorate, the stage of formation when the Jesuits study the humanities.

600 trees were planted on campus.

In November, the School of Architecture won the International Union of Architects Competition, endorsed by UNESCO, and representatives traveled to Paris to receive the award. They also won first place in the SOONTLAN Competition, which was organized by the Ministry of Human Settlements and Public Works. This is the program that has received the most prizes and awards.

In May the first edition of Evo was published. This was a newsletter from the Industrial Engineering program, written by students for the purpose of raising students' concerns related to their professional field. The newsletter had articles of interest for students, a job bank section, and a humor section.

The cafeteria and Psychology Laboratory projects were progressing; in addition, the pertinence of planting bamboo was discussed.

On June 8, a plaque was placed commemorating those who laid the first stone of the campus.

The journal Renglones was presented on March 18.

The Academic Council complained about the disorder in the publication of notices and statements at ITESO, stating that "there was visual contamination and officials did not care."

During the divisional restructuration, the Academic Unit of Intermediate Technology (UATI, in its initials in Spanish) was created from the former "Solar Group," and became a meeting-place for students and teachers to develop technology-related projects.

A brigade made up of Law, Communication Science and Engineering students was organized to go to Nicaragua. Students from UNAM and the University of Guadalajara also joined the movement.

The possibility of increasing the purchasing power of janitors and service personnel was discussed. Wages had remained the same since 1981.

Sinéctica, a journal of the Educational Sciences program, was published for the first time.

Education for all. Open elementary school and middle school was offered to university personnel; open high school followed in time.

Noti-Deportivo, published by the Office of Athletic Promotion, came out for the first time.

On April 23, ITESO gave out the first awards to outstanding administrative and maintenance personnel.

In January, the new 24-seat school bus was first used.

In his final speech, the Rector Xavier Scheifler, SJ highlighted as a personal achievement the transformation of ITESO into a veritable park.

"The university speaking" was an hour-long radio program where ITESO-related topics were discussed. It was transmitted every Wednesday on Notisistema during the 1980's.

By the beginning of 1983, ITESO had educated 21 generations of professionals.

In response to the violence occurring in El Salvador, ITESO in 1989 published a statement expressing its indignation.

A group of graduates started a promotion campaign with the aim of collecting 20 million pesos to continue granting student loans.

After the Rector Pablo Humberto Posada, SJ gave his first Report, the care and growth of green areas at ITESO intensified.

References: Text based on the collection "Historical Events of ITESO", volumes I, II and III, by Alberto T. Gutiérrez Formoso