Birth of the Academic Programs

There are some study programs that celebrated their 50th anniversary together with ITESO. Other programs, like the School for Secretaries, lasted only a very short time. There are programs, such as Industrial Relations, that have emerged only recently in response to changing needs. 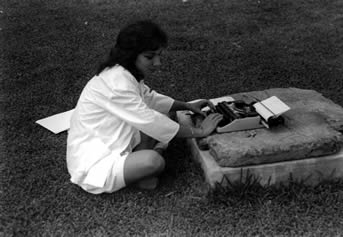 The undergraduate program in Law was eliminated, because students considered it indispensable to be able to obtain a degree. The School for Secretaries was founded.

The Psychology program started, with a focus on educating psychology professionals instead of psychology teachers. The department of Philosophy disappeared.

The Architecture program was founded, with 17 students enrolled, and classes were taught in the first building on campus. At that time the university offered eight undergraduate programs: Architecture, Administration, Public Accounting, Chemical Engineering, Civil Engineering, Electromechanical Engineering, Professional Psychology and Executive Bilingual Secretary. The school periods started in September and ended in June.

The School of Human Resources opened, with courses lasting three years instead of four like the rest of the programs. It was designed for people with work experience in companies and not recent high school graduates. These courses later became the Industrial Relations program.

The School of Communication Sciences was founded, the second in the country. Two people played key roles in its creation and the design of the study program: the Americans Robert McMahon, from Fordham University in New York; and John Boyle, from Loyola University in Los Angeles, California. A group of professionals from Guadalajara also participated: Mario Bauche and Enrique Meludis, from Channel 6, Televisión Tapatía; Mario López Díaz, from Channel 58, Radio Guadalajara; among others. Classes officially started in September at La Casa de los Abanicos (the "House of Fans"). There were 31 students taught by seven professors.

On November 11, the undergraduate programs in Engineering, Chemical Sciences, Accounting, Economics and Administration, Psychology, Architecture and Secretaries were reinforced by the incorporation of ITESO into the UNAM system. The Personnel Administration program was closed, and the program in Pharmaco-biological Chemistry started up.

Social Service was made mandatory, and on ITESO's departmental organizational chart the office of the Bachelor's Degree in Business Administration was created.

The new Accounting School was founded on May 14.

The first 13 Bachelors in Communication Sciences graduated and received their diploma, issued by the UNAM.

The question of whether to keep the School for Secretaries as part of ITESO was discussed in May. Studies were made to determine which programs were best suited to achieve ITESO's objectives.

The Pharmaco-biological Chemistry program was closed.

The Schools of Communication Sciences and Industrial Relations were successfully incorporated into the UNAM system in February.

The Master's Degree in Human Development opened in January.

In April the Master's Degree in Human Development started.

The programs in Marketing and Systems Engineering were founded.

Approval was given to create a Department of Social Sciences to serve the whole university.

The Master's Degree in Human Settlements was created in September.

The School of Communications became part of the Latin American Federation of Social Communication Schools and Associations (FELAFACS, in its initials in Spanish), thanks to the work of Professor María Cristina Romo.

The Master's Degree in Hydraulic Resources was created.

In October, ITESO agreed to establish a School of Education.

Classes in the Master's Degree programs in Communication and Education started on July 29.

The Educational Sciences major was founded in August. In this same year it was officially recognized by the Ministry of Public Education.

In April approval was given to the undergraduate programs in Law, Social Philosophy, International Trade, and the Master's Degree in Community Psychology.

The divisions of Social Sciences and Man, Architecture and Urban Planning, and the Graduate School division were established in May.

The Graduate Program in Administrative Sciences, and the School of Educational Sciences were opened in January.

The undergraduate program in Agricultural Administration was closed in March.

The project for a Master's Degree in Industrial Electronics was approved in September.

The agreement to create departments within the academic divisions was ratified in August, and the first department heads were named.

The Master's Degree programs in Communication and Education were closed, and an undergraduate program in Design was created.

The graduate program in the Design of Human Settlements was closed.

The creation of the Master's Degree in Quality Engineering was ratified in March.

After the academic reform in May, the departmental structure was established as follows: Economics; Education and Values; Electronics; Socio-cultural Studies; Sociopolitical and Legal Studies; Habitat and Urban Development; Mathematics and Physics; Commercial Exchange Processes; Technological and Industrial Processes; Health, Psychology and Community.

New proposals were made on September 23 for Master's Degree programs in Applied Informatics, and Communication with a specialization in the Dissemination of Science and Culture.

The PhD program in the Philosophy of Education began on August 7.

The interdisciplinary PhD program in Social-Scientific Studies was presented on February 19.

The PhD program in Social-Scientific Studies was inaugurated on August 15.

The undergraduate programs in Philosophy and Social Sciences, and the Master's Degree in Social Philosophy were established in June.

The Master's Degree in Constitutional Law and Judicial Injunctions began on August 13.

The undergraduate engineering programs in Networks and Telecommunications, and Information Technologies began in August.

The Master's Degree in Psychology was presented on September 14.

The Master's Degree in Electronic Design began on September 21.

Text based on the collection "Historical Events of ITESO", volumes I, II and III, by Alberto T. Gutiérrez Formoso.