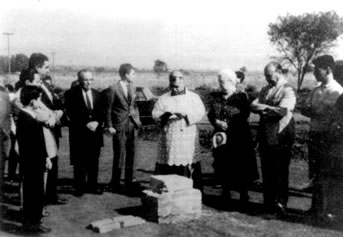 This is an account of how each of the buildings on campus was built, from the placement of their first stone to what they are today.

In August, ITESO's name was defined, as well as its location near the corner of Pedro Loza and Garibaldi Streets.

In August, university personnel moved to La Casa de los Abanicos ("The House of Fans"), located at Libertad No. 1301.

In December, José Aguilar Figueroa donated the 38 hectares where the campus is currently located.

The first brick of the Rector's Building was laid on June 8.

In December, ITESO had 40 hectares of land and 4,600 square meters of constructed areas.

ITESO's second building was completed, and turned over to the Physics and Mathematics Department.

By this time Buildings A and C had been finished. The B building was still under construction. The cafeteria was also operating, and in that year it was known as "El Afro", in honor of a low-life bar located near the Calzada Independencia.

The construction of the computer center began. The Engineering laboratories were known as "henhouses", because they were covered by a simple sheet-metal roof. Students did their topographical surveys in the middle of cornfields, and it was not unusual to see cows grazing in the parking lots.

October saw the inauguration of the new radio and television laboratories, which cost 100,000 pesos.

After remodeling, ITESO's athletic fields were inaugurated on October 28.

The Chemical Engineering lab was completed.

The basketball court was built where the W Building now stands.

On May 13, the ITESO library was inaugurated, bearing the name of Dr. Jorge Villalobos Padilla, SJ. The blessing was given by Cardinal José Salazar.  The director was José González Torres.

The Television Laboratory was inaugurated on May 31. 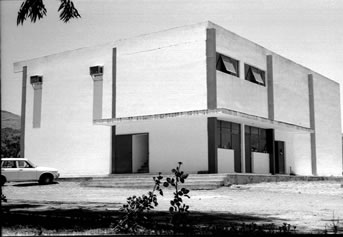 The Calculation Center was inaugurated on May 24. The campus already had a new building, the B building, and the Communication Sciences cabin, which had been adapted for use in 1969.

At the beginning of this year there were 34 administrative offices in spaces that were originally intended for classroom use. There was a proposal to build an office building and thus create space for 2,000 more students.

The audio and photography laboratories were inaugurated.

In February and March, the original cost of the Central Building (currently known as the Xavier Scheifler building) rose by 100%, which served as a warning to review blueprints and budgets more carefully in the future. The building was inaugurated in April. In this context, there was a plan to increase tuition fees. The university was served notice of a foreclosure suit for having built the Central Building without the proper permits.

The Industrial Engineering Lab was inaugurated on February 4.

The A Building auditorium was built.

The Computer Systems Engineering Lab was inaugurated on October 2.

The Inspiration Center, the small chapel (cenacle) and the cafeteria (photo) in front of the Central Building were built. 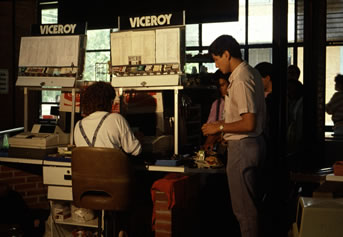 In the first semester of 1982, the Construction Committee concluded the cafeteria, parking lots, perimeter fencing, athletic facilities, the Electronic Engineering Laboratory, and what is known as the little white house.

On August 23 the first brick of the building that would house the Master's Degree in Human Development was blessed.

In mid-1983, 11 proposals for the growth of the campus were discussed: the fountain, the founders' monument, the walkways, the solar calendar, the administrative offices, the engineering workshops, an observatory, the parking lot on the west side, the library, the Communication Sciences labs and the athletic fields.

The Graduate School Building and the Copying and Printing Center were built. 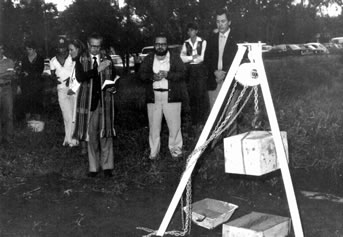 The Vocational Guidance Center was officially inaugurated on March 1.

On November 15, a plaque commemorating ITESO's founders was unveiled.

The first brick of the Electronic Engineering Building was placed on July 15.

The ITESO bookstore-stationery store was inaugurated on August 2.

The university met with Javier Aguilar Valencia  (son of José Aguilar Figueroa, donor of the land where the campus is built) to discuss the boundaries of ITESO and prevent future access problems.

ITESO's President, Francisco Mayorga, gave his report, in which he mentioned that the access to the campus and the first phase of the D Building (26 classrooms) had been completed.

In April, the first brick was placed for what would be the Offices for Professors of the Economic and Administrative Sciences Division. 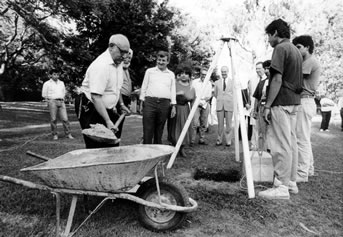 The first brick was placed for what would be the building for the Engineering Division, and the Professors' Offices were inaugurated. The Obelisk at the entrance to the campus was also built, bearing the ITESO logo and slogan.

After the earthquake of 1992, overloaded buildings underwent inspection. The structures of the E Building were reinforced in response to the risk that it would not withstand another earthquake.

The ITESO bookstore opened in February, and in March, the Health Psychology Unit.

The Chemistry, Civil Engineering, and Physics labs were built in September. 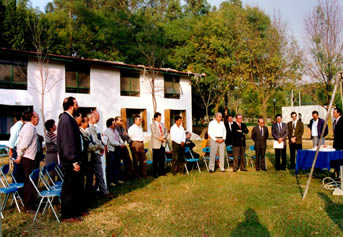 The rate of construction was remarkable: the beginning of the library, the renovation of the electrical installations, integrated drinking water networks, walkways and building reinforcements.

The Automated Electrical Systems Design laboratory was inaugurated on February 17.

The first brick was laid for what would be the new Dr. Jorge Villalobos, SJ Library. On August 11, the new Architecture and Design building was inaugurated.

By mid-1996, the construction of the wastewater treatment plant and the Pedro Arrupe, SJ Auditorium had begun. The Auditorium was completed in 1997.

The Library Building was inaugurated with up-to-date equipment and design.

The statue of St. Ignatius of Loyola was unveiled on March 25.

The Pedro Arrupe, SJ auditorium (photo) was inaugurated, together with an adjoining cafeteria. 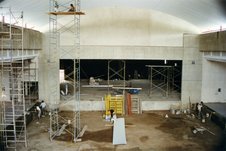 The first bricks of several buildings were laid and blessed this year: the new workshops and laboratories for Industrial and Technological Processes; the Technology and Design Lab; a Community Service Unit, and athletic facilities.

The inauguration of the Digital Design lab represented an investment of 200,000 dollars in equipment and high-tech software.

In August, the Construction Committee decided to expand access to the main entrance to campus. The ITESO Sports Complex was re-inaugurated on September 29.

The teachers' office building was inaugurated in January.

The Plaza Gourmet was opened at ITESO's Central Cafeteria.

The Architecture and Design cafeteria was inaugurated on May 4.

The Central Cafeteria was expanded and reopened, and the Mathematics and Physics labs were inaugurated.

A new parking lot for university staff and faculty was opened on January 19.

The first brick of the Luis Hernández Prieto SJ Graduate School Building was laid on June 13.

The pedestrian bridge to ITESO was completed on March 3.

The Auditorium Cafeteria opened on March 24.

The Graduate School Attention Module was inaugurated in August, and the remodeling of the ITESO Chapel was completed. The legend: "ITESO, Universidad Jesuita de Guadalajara" was placed on the pedestrian bridge. The Language Lab was completed.

The Central Square fountain was inaugurated in September.

The Information Technologies Building was inaugurated on September 5.

Construction on the Cultural Promotion workshops began in January, along with the expansion of the Library to house the Francisco Xavier Clavigero collection, which ITESO had received on loan from the Free Institute of Philosophy and Sciences.

The Vehicular Electronics Technology Center (CTEV, in its initials in Spanish) was officially opened on March 9. The new teachers' and graduate students' lounge in the W Building was opened on May 30.

New bathrooms, dressing rooms, restrooms and bleachers were added to the Sports Complex.

The expansion of the Dr. Jorge Villalobos Padilla SJ Library was inaugurated on November 23.

The Computer-Assisted Design Lab was inaugurated on December 7.

Text based on the collection "Historical Events of ITESO", volumes I, II and III, by Alberto T. Gutiérrez Formoso.